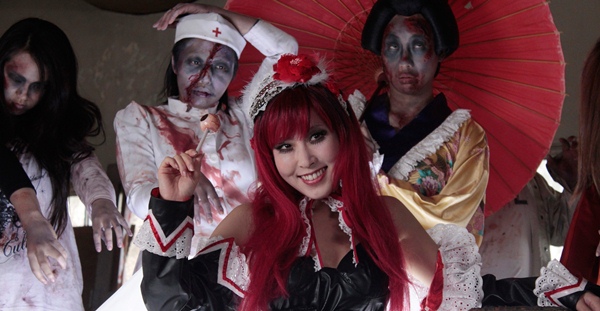 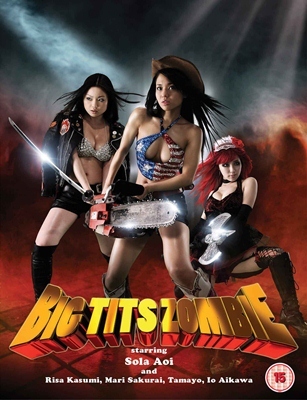 The story follows a group of asian girls whom have lost all form of income and become strippers to help out with the local economy, the man whom runs their club even says "I'm only doing it (running the strip club) because the tourism board asked me to" of course the five girls accidently find a cellar, which has a copy of the Book of Dead, that one of them can read with ease, from this point the movie is what you expected to see, the girls struggle to survive the zombies while one of them goes crazy with power, all while trying to keep their stripper outfits on.

Well what can one say about a movie with the title Big Tits Zombie, i sat down to watch it with good humour and that is what i received, a low budget zombie movie with some nice blood and jelly spattering scenes, including a great ping pong scene, some chainsaw hacking and sword splitting action, what i did not expect to see, was a scene that made me laugh the most, that I can only assume was only in the original Asian version of the movie, as no other reviews mention its mostly Asian appeal.

I quiet enjoyed the movie, its 73 mins during which i laughed and giggled out loud, while not being disgusted by the gore or language, i don't reconmend it for people who hate zombie or 1980's style titty flicks, for the rest of us though, get your eyes and ears onto this one soon.